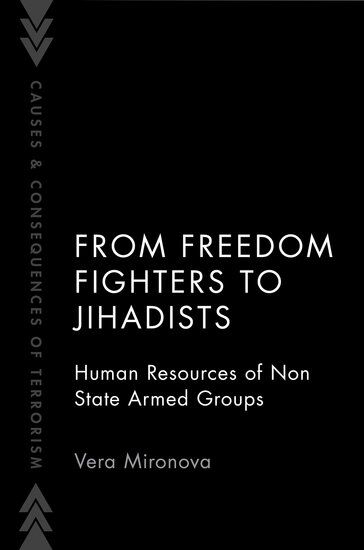 The first title in the START-Oxford University Press book series, “From Freedom Fighters to Jihadists: Human Resources of Non State Armed Groups,” was released this month.

The book, written by Vera Mironova, draws on her experiences being embedded with Iraqi special forces, and interviewing members of the Islamic State. Mironova uses labor market theory to explore why extremist Islamist groups were able to recruit and retain fighters.

“I have embedded in special forces units all over the world,” Mironova said. “I went to Iraq, and I made an agreement with the Iraqi generals. They wondered, ‘Who the heck are you?’ I’m this blonde Russian girl, and they don’t have women in the military. Over time their trust in me increased, though at one point they did accuse me of being an ISIS spy. I don’t blame them for not trusting me, the atmosphere was so tense.”

Mironova also talked about interviewing ISIS fighters before and after she was in Iraq.

“It was not hard to make contacts in ISIS,” Mironova said. “There are Russian speakers among the foreign fighters on the ISIS side. First we talked about what we had in common to build trust—where we went to school, things like that. It was a time-consuming exercise. I was in the U.S., sleeping all day and texting them all night because of the time difference to Syria.”

Mironova’s colleagues at START were enthusiastic about her book being the first book in the series.

“We are very excited to see the publication of Vera Mironova’s ‘From Freedom Fighters to Jihadists’—the first book in the new START-Oxford book series on the causes, conduct and consequences of terrorism,” START Founding Director Gary LaFree said.

The book examines the internal organization of armed groups and, in particular, their human resources. Analyzing the growth of these groups through the prism of a labor market theory, the book shows that extreme Islamist groups were able to attract fighters away from more moderate groups because they had better internal organization, took better care of fighters both physically and monetarily, experienced less internal corruption, and effectively used their Islamist ideology to control recruits.

The book also builds on some of Mironova’s work as a START Terrorism Research Awardee, “Labor market for rebel recruitment in Syrian Civil War,” which she conducted while a doctoral candidate at the University of Maryland and a graduate research fellow at Harvard Law School, having already completed all required coursework for a doctorate in Economics at Stony Brook University, SUNY.

“Thanks to funding from DHS S&T Office of University Programs, START was able to invest in promising doctoral students through the Terrorism Research Award program,” said Marcus Boyd, director of Graduate Studies at START. “Vera was one of those promising students, who is already making impactful contributions to counterterrorism policy and practice just two years following the successful completion of her degree program.”