Why Russia will annex Ukraine 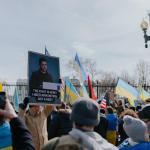 With the recent invasion of Ukraine by the Russian Federation, the world has witnessed the role that media propaganda plays in modern warfare. Although scholars and geopolitical analysts have addressed the Russian propaganda, very few people have addressed the Western and Ukrainian propaganda. There is a world of difference between the digital war and the war on the ground that is taking place on the ground in the Ukraine. It also shows a troublesome disconnect between the reality of the geopolitical playing field and the internet. While pro-Ukrainian and pro-Russian propaganda is competing to convince the world of their side of the story, the reality of the role of NATO and the European Union lurks around in the background. The truth is that NATO and the EU will not go to war over the Ukraine despite the promising words of support from the political leaders in Europe. This is a truth that the Ukrainian President Volodymyr Zelenskyy should come to terms with.

The Cold War is not over

Despite what they are teaching at schools all over Europe and the United States the Cold War is not over. When the Berlin Wall fell and the Soviet Union collapsed, the Cold War went into a slumbering phase, but it was not over. For the West the Communist Threat was finally defeated, and there could be a full global focus on economic growth. But before the Soviet Union was, there was the Russian Empire and although the Soviet Union was no more, Russia was still confronted with threats to the nation-state. While the EU slowly expanded over the course of the past 30 years so did the NATO pact. The disintegration of Yugoslavia, the Kosovo war showed that NATO had the potential to not only be a defensive pact but also a pact that could pro-actively get engaged into a conflict. Something the Russians are very wary off especially after the dissolution of the Warsaw Pact. Russia has a large territory that covers both the Asian and European continent. As a result, It has adversaries on both the West and also China in the East. In a sense, the disintegration of the Soviet Union has resulted in various complexities in Russian foreign policy.

NATO is still a defensive pact

Despite the voices in the media, NATO is still a defensive pact and NATO is aware that it can show force by sending troops to NATO member states as a deterrent. But that is the extent of what NATO will do in this conflict. NATO member states may send moral and material support, but the chances of them sending troops or establishing a no fly zone over Ukraine who is a non-NATO member is far fetched. Ever since Putin decided to Ukraine, he has been keeping a close eye on the moves of NATO members. His decision to order the nuclear deterrent forces to be alert is a sign of aggressiveness towards NATO members to show the potential consequences of a direct involvement of NATO. Therefore, any drastic moves from NATO's side can escalate the conflict and it could turn the conflict into nuclear conflict.

Russia has no choice but to finish this war and annex Ukraine. The Russian perspective is obvious, it will not allow a further expansion of NATO in former Soviet territory that could cripple Russia's regional power status and result in several security dilemmas. In other words, Russia will not allow itself to be boxed in. The invasion of the Ukraine can be seen as a last resort from Putin's side, but also the kind of resort that should go unchallenged by the West. Putin has already calculated the cost of this invasion, and the benefits outweigh the costs in every scenario. Zelenskyy needs to understand that Putin will not step down and that the West will remain an ally of Ukraine but only to provide moral and material aid.

The end of the Ukraine?

The prospects for the Ukraine as an independent nation look grim and the reality of the current military operations show that Russia is set on annexing the Ukraine. A permanent Russian troop presence is to be expected, making Ukraine and Belarus the buffering states between Western Europe and Russia. Where does this put the Ukrainian people? In a very difficult position. They wanted democracy and freedom, but that dream is now further than ever.